The company specializes in innovative water treatment solutions with the use of renewable energy.

The first development phase resulted in the industrialization of OSMOSUN®, the world’s first industrial product range of seawater and brackish water solar powered desalination plants, with a daily production capacity ranging from 1 to 600m3, and up to 15 000 m3 with hybridized energy sources.

Since 2014, this groundbreaking patented innovation enables communities, public utilities and private organizations from the whole world to produce affordable and sustainable fresh water with no greenhouse gas emission.

Our range of solutions is addressing all decentralized needs for water treatment installations.

We assist you to develop a modular and robust system to address your water needs sustainably.

We offer a range of financial services, from leasing to PPP and BOO models, so you can directly benefit from affordable water production.

We deliver a turnkey solution ready to supply water autonomously, even to your most isolated sites.

We supply OSMOSUN® skids or containerized systems for local integration.

Off grid or grid tied, the patented innovation lies in the flexibility of the production for an optimized energy consumption, key element for a sustainable and competitive water production.

The result is impressive: « The OSMOSUN® lives to the rhythm of the sun”

Climate change and population growth will double the demand for water by 2030 (UN). Nearly 3.9 billion people could run out of water by 2040 (OECD), foremost among them are the poorest.

Faced with this challenge, Marc Vergnet and Maxime Haudebourg created Mascara NT, a company specialized in innovative water treatment using renewable energies, to produce fresh and affordable water for all.

The meeting of two entrepreneurs - A virtuous vision for the future

Episode of the show :

In addition to being among other well-known objects an innovative company, MASCARA was originally a very beautiful small town located in the Algerian Atlas. A village with which we share special affinities, having seen one of the founders grow up there who hydrated himself throughout his youth with the brackish water that supplied the region at the time!

Founded by Marc Vergnet and Maxime Haudebourg
with the vision of providing renewable powered water for the water stressed populations of the world.

First OSMOSUN® unit implemented in Abu Dhabi as part of MASDAR Renewable Energy Desalination Program
The PV-SWRO desalination unit without battery demonstrated the lowest energy consumption with 2,5 KWh / m3 for an incoming salinity of 35 g / L (in competition with Veolia, Suez, and Abengoa).

First unit implemented for utilities on islands and coastal communities
in Polynesia and then South Africa.

First water access through OSMOSUN® Brackish Water
in off grid communities in Mozambique.

First responsible water management plan of an hotel
supported by the implementation of an OSMOSUN® in Mauritius.

Our team of about twenty people gathers internally the set of skills required to address the multiple specific challenges faced for sustainable water treatment applications. 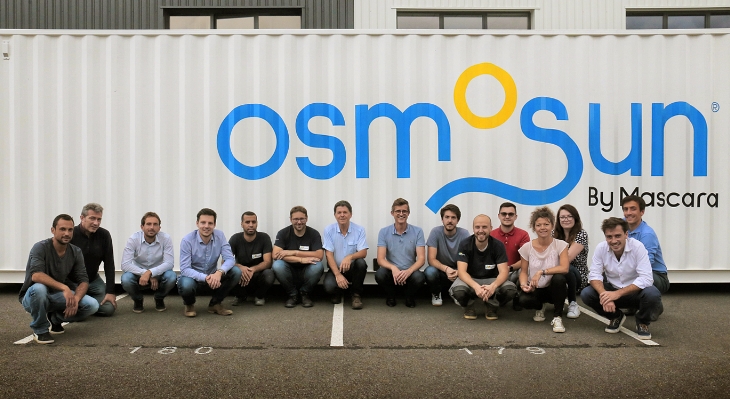 Industrial capabilities for designing, manufacturing and commissioning our solutions.

Holistic approach to challenges related to resources and the water cycle.

Experience from development to delivery of turnkey projects internationally.

Team leaders in our company

After a few years as a professor of electrical engineering and automation, I created, developed and managed a design office for automation and industrial maintenance in Eure et Loir.

10 years later, I left my company for a research project on unconventional energies in a Scientific Research center in India, which will allow me to become an expert and speaker in renewable energies. In the process, I created a company to design and manufacture special machines for the food industry and reverse osmosis water treatment for developing countries and farmer-processors in France.

With more than 30 years of experience in the creation and management of companies in very diversified activities both national and international, I am at the origin of many projects in mechanics, hydraulics, renewable electricity and industrial IT.

I have always been passionate about research and development of new solutions for the most underprivileged populations. I have thus worked on the industrialization and the concrete implementation in the field of the innovations I have developed, and which have been the subject of 18 patents registered in the last 40 years, in the water, solar and wind energy sectors.

I was responsible for renewable energies at the French Agency for Energy and the Environment (ADEME) when these issues were marginal, before founding and directing the development of the Vergnet Group for 25 years, specializing in rural hydraulics (60 million people benefit from the Vergnet Pump water supply throughout Africa), and wind energy with patented cyclone-proof wind turbine technology. (700 Vergnet wind turbines installed worldwide).

In January 2020, I became the new CEO of Mascara. After Chemical engineering studies in France and UK, I began my career in 1999 at the CEA (French Atomic Energy Commission) as a researcher and then in 2004 as an international production manager at BP.

In 2008, at ENGIE, I was in charge of the development of innovative subsidiaries where I cultivated an entrepreneurial approach for industrial projects related to environmental challenges: clean mobility, biogas, hydrogen, etc.

More than ever, after 25 years of professional experience, I remain driven by the development of clean industrial solutions for a sustainable future!

I studied engineering with a specialization in renewable energies and automated processes, and I am in charge of R&D at Mascara since 2016. I contributed to the development of the OSMOSUN® range for seawater and brackish water desalination, participate in unit design, tests in our workshop, and commissioning on site.

I managed several R&D projects, such as DEMOS and ECODESS funded by ADEME, whose main research themes were the coupling between renewable energies and OSMOSUN®, the development of alternatives to chemicals in the desalination process, recycling of reverse osmosis membranes and remote monitoring of OSMOSUN® units.

Engineer by training and after spending several years in the energy field, I joined the Mascara team in 2018 as a Project Manager. The challenge and strong values offered by Mascara allow me to grow on current topics that I am passionate about such as innovation, universal access to water and electricity, resilience of populations to climate change, an international and multicultural work environment or the decentralized approach that takes into account the specificities of each territory.

In charge of project development and implementations, I drive projects from their response and contracting phase to the commissioning of the various OSMOSUN® seawater and brackish water desalination projects carried out by Mascara worldwide. I also contribute to the structuring of the Projects department and to the operational and commercial development of the company.

After studies in international business opening me to multicultural exchanges while developing my skills in fields of activities as diversified as the creation of perfumes, the soap industry or the transport of people, I’ve made my mark by accompanying the companies in their administrative, financial, commercial, marketing and HR steps.

My education and my open-minded character have always allowed me to evolve; I’ve built my career to be an effective tool in the development of skills and useful to the company's organization.

Today, I use this range of skills at Mascara in the position of Office Manager, which is enriched day by day thanks to the new challenges that I like to take up as much in team as in my personal development.

Being part of the Mascara adventure was an obvious choice that gives meaning to the work: transforming salt water into drinking water for the people who need it is vital!

I’m proud to participate in this achievement by implementing all the means to support the employees on a daily basis.

With an International Business background, experiences in consulting and business development in France, Africa and the Asia-Pacific region for the telecom and sustainability sectors, I joined Mascara in 2016 to support a more renewable powered water future with OSMOSUN®, the solar powered desalination technology by Mascara.

I strongly believe that solutions combining sustainable business practices and frugal technologies have the power to address today and tomorrow’s challenges.

We Support Their Projects

We work all over the world. We deploy water production projects within the framework of national programs, for local authorities or private clients. We are proud of the trust our clients place in us.